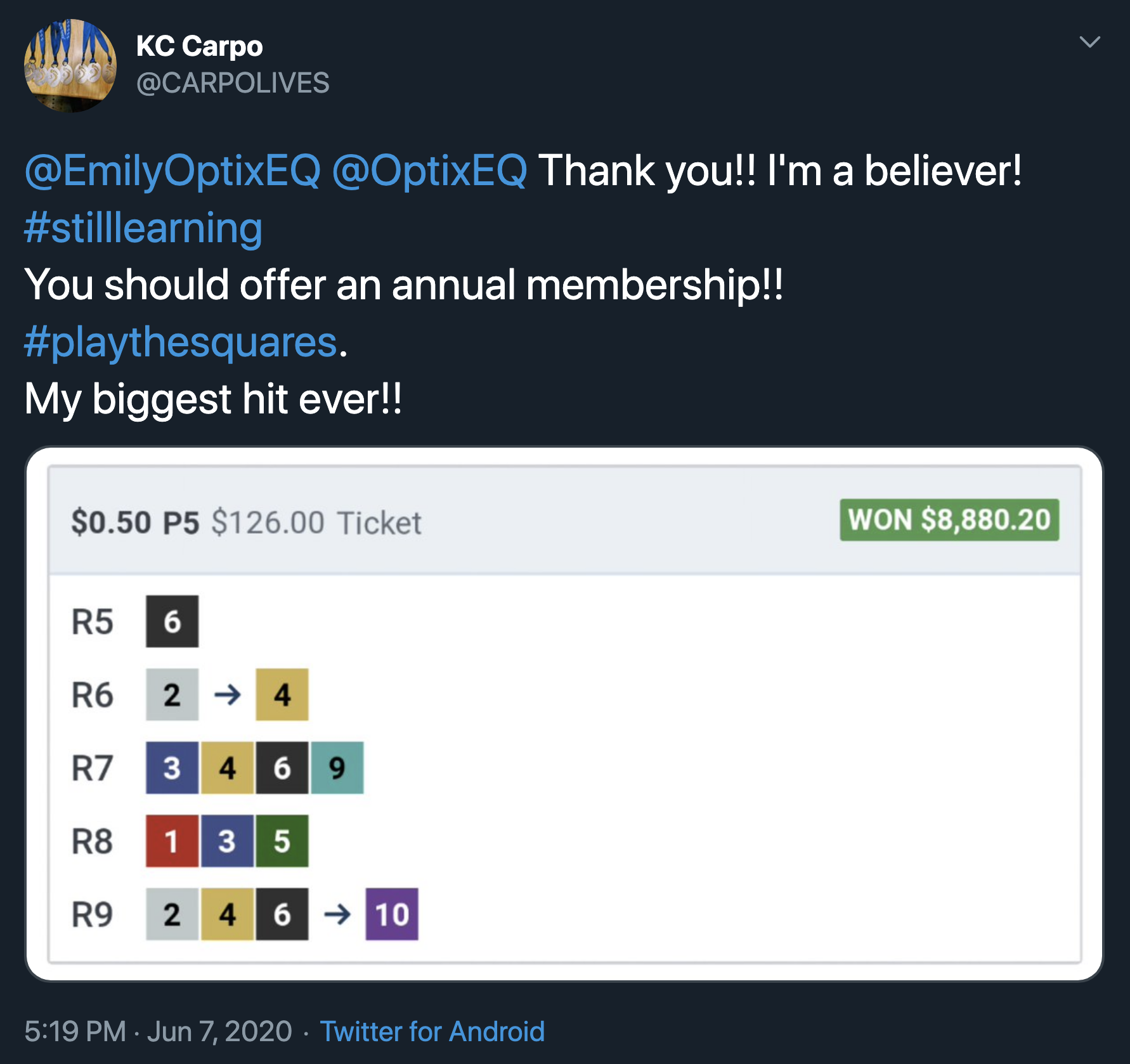 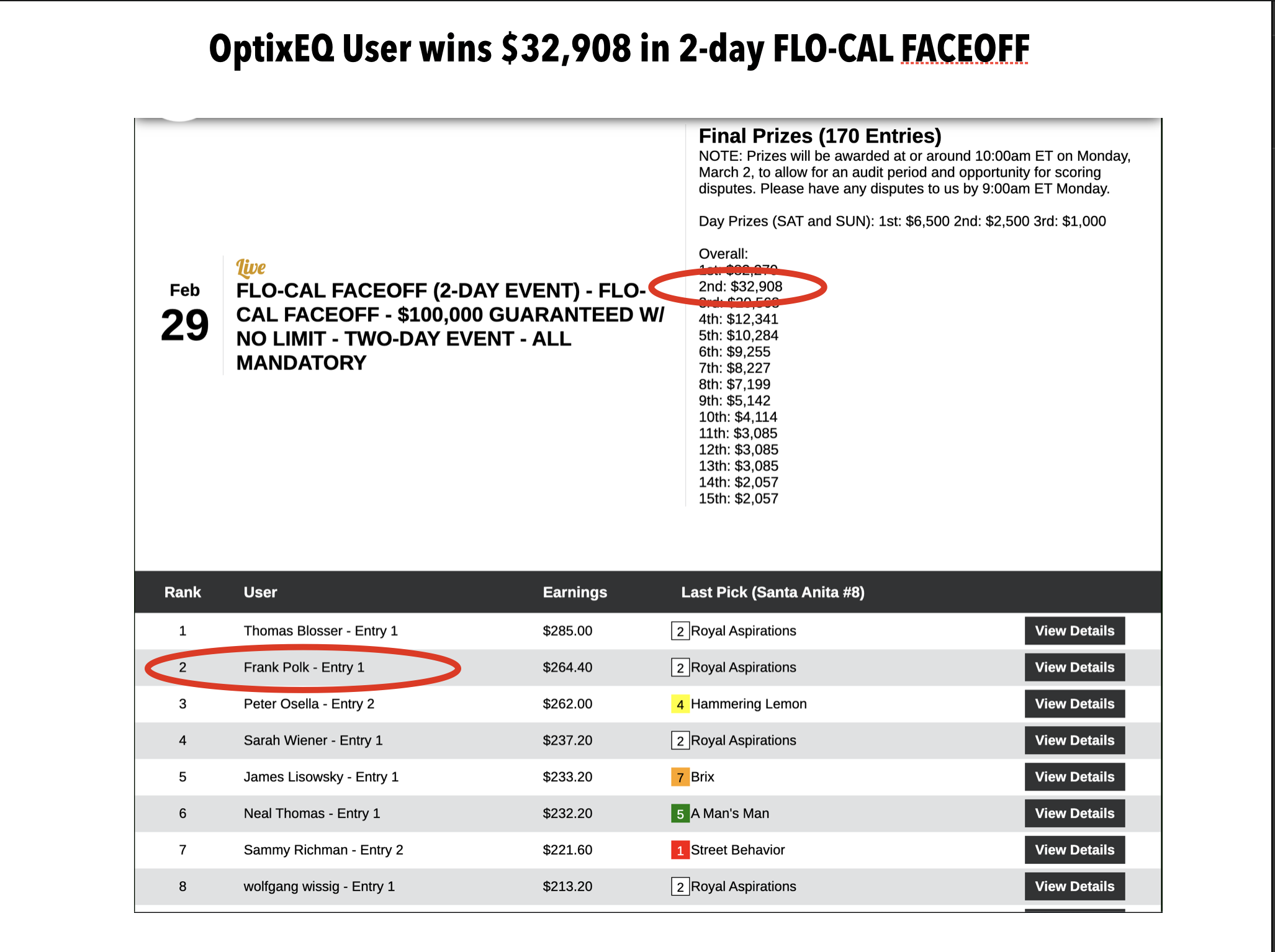 The 2020 Pegasus World Betting Championship took place at Gulfstream Park on January 25. More than 200 entries competed, with each entry starting with a bankroll of $5,000. When the smoke cleared after the last race, two names stood out atop the leaderboard: father-and-son duo—and committed OptixEQ users—Bill and Brian Chenvert. Brian put up a score of $62,625, taking home the first prize of $193,633. His father, Bill, came in second with a score of $58,650 —thanks to crushing a Mucho Gusto/Mr Freeze exacta in the final race, the Pegasus World Cup Invitational (G1), to finish second. In this brief interview, we talk to second-place finisher Bill about his experience with OptixEQ and how he uses it as a major part of his handicapping.

OptixEQ (OEQ): Horseplaying is obviously in the Chenvert blood: How long have you been a horseplayer, and what got you interested in the sport?

Bill Chenvert (BC): I’ve been playing the horses for more than thirty years. I started in 1986, after Canterbury Downs opened.
—

OEQ: How did you hear about OptixEQ, and when did you start using the OptixEQ platform to do your handicapping?

BC: My son Brian, who is also a horseplayer and who has had some recent successes in some pretty big tournaments lately, told me about the platform last year, and that’s because [2012 NHC champion] Michael Beychok had shown Brian how to use it at the 2019 NHC.
—

OEQ: OptixEQ has many features, but we’ve found that some players like to rely on one feature more than others. What do you like best about OptixEQ and why?

BC: I like the win percentages for the different quadrants [i.e., the Quad Stat feature in OptixPLOT]. It really helps me handicap because I can get a good sense of where the winners typically come from and which quadrants are the strongest for that particular race. Based on that data, I can then focus on certain horses when constructing my tickets.
—

OEQ: How do you take the OptixEQ information you’ve gleaned from a race and use it to wager maximally and efficiently?

BC: It’s pretty simple. I focus on early speed and pace. Then I figure out how to bet based on the race shape.
—

OEQ: Tournaments require a whole other level of strategy—not only do you have to build your bankroll, but you also have to worry about other players putting up a bigger score than you. How has OptixEQ helped in your recent tournament success?

BC: I’ll give a specific example from the recent Pegasus tournament. I liked that Mr Freeze had early speed and was in Quadrant 1—and was a good price. I pegged him to run a good race, and then I was hoping Mucho Gusto—who was a big box in Quadrant 1 and my top horse— could pass him to key the exacta. I hit that for pretty good money in the tournament and ended up finishing second behind my son Brian.

OEQ: When you first started to use the platform, how much of a learning curve was it for you?

BC: My son Brian helped me. He showed me a bunch of the features, and I also watched a lot of the online tutorials on the OptixEQ website. I feel like I haven’t even scratched the surface yet—there are so many good features. I’m still learning, to be honest.
—

OEQ: When you assess a race using OptixPLOT, is there anything specific you are looking for? In other words, are there certain situations that come up that allow you to bet with the utmost of confidence?

BC: I mentioned that I like to use the Quad Stat feature—so I’ll look at that and then bet against favorites who have lower percentages. That’s where I can find good value in a race. —

OEQ: Now that you’re a regular OptixEQ user, is there any advice you can give to someone using OptixEQ for the first time? And by that same token, is there anything you’d like to see incorporated into the platform in the future?

BC: The best way to learn it is to use it. Start off by watching the online video instructionals and then keep playing around with the program. As for new features, maybe there is a way to incorporate more off-track data for when the weather is bad and the track comes up sloppy and the races are moved off the turf.